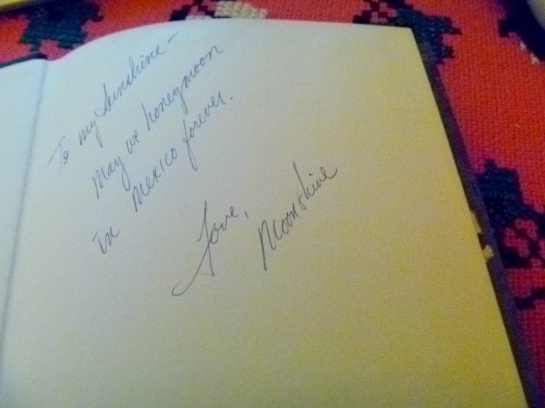 Dedication on inside cover of a book I picked up today. Cheese =D

I was looking for another Dandicat and found this one.  The dedication belongs to a used copy of  Mexico Mystique- The Coming Sixth World of Consciousness. This a moment in synchronicity as I found out the book was a basis for the speculation of the end of the long count calendar of the Maya.  Waters indicates a 2011 end to the cycle but still in December.  The text breaks down a lot of anthropological speculation and sheds light on the ends and beginnings of previous worlds (Atlantis, Lemuria, etc)

“Man’s evolution thus far had followed the line of descent of spirit into matter.  …  He had fully developed a physical body from soft androgynous form, with a division of sexes.  But he was not wholly corporeal, being receptive to cosmic influences and spiritual guidance.  Now he was ready to begin the ascent of spirit out of matter in full self-consciousness.”  -page 107 on the Laws of Manu and the Myth of Atlantis